From Auskick to AFL: Parks’ pathway to the big time

Luke Parks’ first footy experience came as a six-year-old when he laced up his boots for Auskick. Fourteen years later, he was running around at Marvel Stadium wearing a Carlton Blues jumper thumping Freo in Round 3 2021.

Parks is a humble player, but he’s hungry. Selected as a rookie ahead of the 2021 season, he outdid his expectations by playing six matches.

In a chat with Ryan O’Keefe on the Play On podcast, he said: “Getting six games in last year was more than I could have asked for, of course. Even getting one was just the best thing in the world. But you’ve got to take them in your stride and never be satisfied and want more. I want to double the amount of games and cement my place in the side.”

After Parks’ Auskick experience, he played at St Ives but admitted it was “nothing too serious, I just wanted to have some fun with my mates.”

That fun turned into a berth in the Swans Academy at age 11, then the North Shore Bombers in his senior years. While footy was always his premier sport, Parks played cricket, basketball, surfed, skated and played rugby for his school, Knox Grammar.

After being overlooked in his draft year, Parks moved to Adelaide, to play for Glenelg in the SANFL in 2020 – a year after its 2019 premiership.

Carlton was the only club who approached him and were cagey about selecting the 20-year-old: “They held their cards pretty close to their chest,” said Parks on discussions with Carlton. “I didn’t expect anything at all and being rookied to them was just an amazing moment – I was not expecting it at all.”

Parks looks as much like a pro surfer as a footballer and spends his spare time either at Torquay (possibly hanging out with locals, the Curnows) or Urban Surf to keep his appetite for the water satiated.

He’s incredibly laid back, but is bullish about Carlton’s chances in 2022. “We’ll definitely be surprising people that’s for sure,” he said.

As for the club’s new coach, certified AFL Legend, Michael Voss. Parks can’t remember his playing days, but understands the gravitas Voss brings to the group. 2022 has big things in store for Parks and the Blues.

Listen to the full interview on Spotify or Apple Podcasts.

lRound 2 Opens Girls Independent Schools Match of the Round Preview- Ravenswood vs Brigidine
Register by 1 April and Win!r 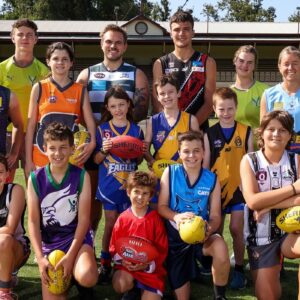 Register by 1 April and Win!

Round 1 Opens Girls Independent Schools Match of the Round Review